This is the first in a multi-post series outlining some ways of using Progressive Steps to Syncopation to do a samba. I usually use actual Brazilian rhythms for that, but many of the rhythms in Reed work too.

The first thing is a preparatory exercise for doing a surdo-type part on the tom toms— a basic structure for that feel, and a couple of rhythmic moves that will occur when working out of Reed. Typically this involves a high drum on 1 and a low drum on 2 (counting in 2/2), and sometimes a low drum on the whole last half of the measure— at the end of a two, four, or eight measure phrase. The sticking is simple, but it does have to be worked out to catch the right drum at the right time. 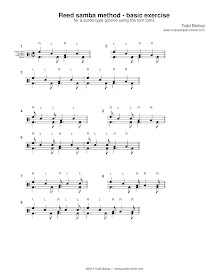 Accent the toms, especially the low tom on 2. Play the snare drum hits generally quietly, adding some accents as you see fit. You can also play rim clicks on the snare drum. I was doing this with the Hot Sand loop, which is a pretty bright tempo.

You should get my book, Playing Samba and Bossa Nova for some practical guidelines and materials for playing these styles. Also see my series of posts on samba cruzado for another way of doing the type of groove in this post.