Put this in your binder with Kenny Clarke's fours from Love Me Or Leave Me that I posted a few years ago. Here he's trading fours on Two Not One from the album Lee Konitz with Warne Marsh. For some reason he has me thinking about Philly Joe Jones— I never thought about Joe being especially a Kenny guy, but I'm feeling a strong semblance here. The tempo is bright, fours begin at 3:55. 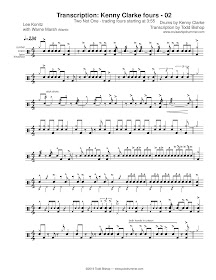 As usual, Clarke doesn't play the tom toms at all. The triplet lick in the first two lines, that happens several more times, I suspect is played with a paradiddle sticking starting with the left hand— either LRLLR or LRRLR (I prefer the latter). At the beginning of line 3 play five-stroke rolls ending with stick shots. On the last two measures of line 5, you can start with our previous paradiddle lick, then two double paradiddles, then singles. Or do the whole things as singles. Pencil in whatever sticking you want to use. Use a RRL sticking on the triplets in line 6. The four-stroke ruffs in line 7 are some little personal flash lick of Clarke's; what I wrote appears to be what is played— you can really play them however you want.