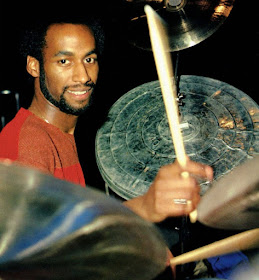 Omar Hakim speaks to Modern Drummer when he was with Weather Report in the mid 80s:

RT : How did you learn to play bop so fast?

OH : I don't know. With much difficulty. No, with me, playing fast is a relaxation thing. You start to come up with tricks to get that right hand moving. And then it's not always the cymbals; you've got the hi-hat you're working with. To play that kind of bebop is a hands thing. The bass drum is giving the accents and dropping the bombs during the solos. The bass drum is weaving. “Fast City” is one of the fastest songs I've ever played. There were a couple of songs I did like that with Mike Mainieri, but you learn your tricks for doing it.

RT : But it's funny you would say you had to relax to play at that speed.

OH : You've got to relax. Before you tense up, you've immediately got to say it's not fast. Victor and I had a long discussion about that when we were learning it. Don't think of it as fast. It's not fast. Never mind the fact that you're going to pass out when it's over; it's not fast.