This is a fairly epic two-minute thing I should really be submitting to Drum! or Modern Drummer, but— well, actually, I'm going to do that, so you'd better get this while you can, because I'll be pulling it at the end of the funds drive. After that, you'll have to wait and see if it comes up in one of those magazines.

So: This is “I'm A Beautiful Guy”, from Frank Zappa's You Are What You Is, and it looks pretty scary— it is pretty scary— but it should be well within the grasp of most early college-level drummers. In fact it would make a nice college audition or jury piece. Or you can just make a YouTube cover of it. I've written this to be as playable as possible, instead of an exact note-for-note transcription, but I haven't edited out much. The drummer is the little-known, and highly underrated David Logeman, who kills it all the way through this record. 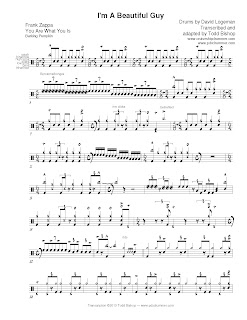 The chart calls for a drum set with four tom toms, plus two Roto-toms or bongos, but you should be able to adapt it to any sized drumset. If I can be bothered to drag out my 10" tom tom, I'll be working  it up on a five-piece.

To approach this thing, first just listen through the recording with the printed transcription, and try counting through the meter changes. Then you can start trying to reconcile the notes on the page with what you're hearing. The major grooves or repeated figures that occur during the piece happen at measures 1-2, 8 and 11, 28-31, 42-43, 59-60, and 84-85. After you've looped those and can play them at tempo, try working up whole sections: 1-22, 23-38, 39-53, 54-81, and 82-end. You'll probably need to isolate several of the fills, especially the one at 17-18. With those septuplets that occur several times, use the sticking RLRLRLL.

Get the pdf [This was a special feature for the fund raiser, and the link is now down— I'll announce when and if it will occur in print. -tb]