It's a flam accent throwdown!

Oh, it's on.* I guess. At least, Sam Nadel has posted a nice flammed triplet warm-up, and, inspired by that, I wrote a similar one of my own, with flam drags, and same-handed flam accents, a pseudo-rudiment I use a lot: 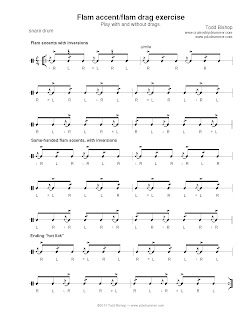 It's short, so you could stretch it out by repeating each line, and the entire four measure “hot lick”, maybe playing the drags on the repeat only. In its complete form it's pretty challenging, so you'll certainly want to leave the drags out at first— and maybe even the flams, and get the lay of it just playing accented triplets, with the mixed sticking.

And just so drag notation is clear to everybody, the first measure would be played like this:


* -  Sorry about that— we watched the South Park “F'ed in the A” episode last night: