Or as I usually call them, “Swiss” sixtuplets— that's my own coinage, based on  an overheard  conversation between two drum corps legends, George Tuthill and Alan Kristensen, who were my corps director and percussion instructor in 1984-85. George was mentioning to Alan that Swiss rudimental drummers play sixtuplets not as singles, as Americans do, but with the RLLRRL sticking. I don't know if that's accurate, or even if I heard him exactly right. It doesn't matter; I still call them that. Usually in the US they're referred to as six-stroke rolls,

I guess we'll put this in the old “survival chops” series; these are very easy to play, and fun, and you will quickly come to rely them as a primary go-to lick for soloing and more dense fills. 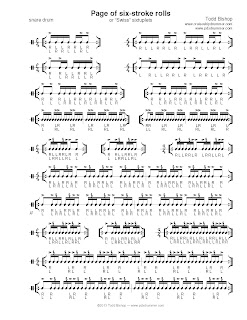 Hopefully the formatting isn't not too hard on the eyes. When using these on the drumset, try catching a cymbal on some or all of the accents, along with the bass drum. A hip, fusiony lick of Dave Weckl's is to play the second double in the pattern on the bass drum. Have fun.