This is a 70s type of rock triplet feel groove that doesn't seem to be used much any more— I don't know why, it's easy and fun to play, and must have an easy guitar equivalent. Mostly the hands just alternate, with the bass drum played in unison with the right hand: 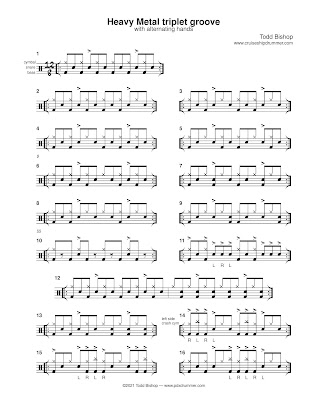 The patterns are mostly normal things you might do with this type of feel, except 12 and 13, which... they're exercises, and your results with them may vary.

I worked it out from this dumb song by the band Anvil— Kerrang! magazine included it as a floppy 45 in one of their issues in about 1983— my Metal phase lasted from about summer 1982 through summer 1983. The drummer on the record plays it weirdly, with two bass drums.

I also heard it on Phantom of the Opera from Iron Maiden's first LP:

More recently, from a band I never heard of, Ocean Colour Scene, that had a good song on the Lock, Stock, And Two Smoking Barrels soundtrack. They borrowed the figure from the Maiden song, which is pattern 11 on the page.

The basic feel turns up on some Deep Purple records (Burn and Machine Head), although Ian Paice doesn't do the alternating hands thing on it. What he does is more like pattern 9— which happens to be the groove on the rock section of Bohemian Rhapsody. It's probably on a lot of other British rock records from the 70s— Thin Lizzy, Rainbow, Judas Priest, or whoever. Butthole Surfers do a sort of a punkified Gary Glitter type tom tom groove with two drummers on the song Dum Dum.