Took a break from the really long and hard Elvin Jones transcription and did something else really hard. From the Freddie Hubbard album Straight Life, this is Jack Dejohnette playing behind Joe Henderson's solo on Mr. Clean. It's quite dense. The transcription begins at 3:58. 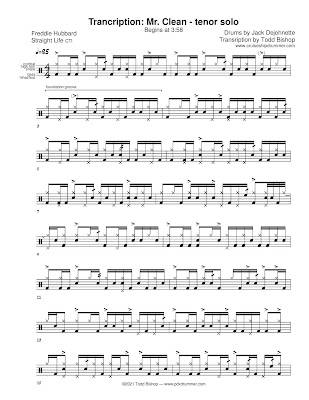 It gets so dense I was presented with some formatting problems— like if anyone's going to do anything with it, I have to do one measure per line on a lot of it: 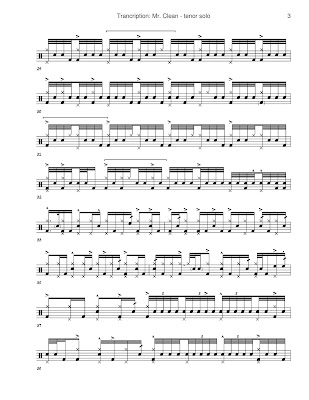 I've put brackets over a few things that are easy to work out as patterns. There's probably more, but I didn't take a lot of time to analyze it. You could actually write a whole book breaking down what he plays here.

He plays 8th notes on the ride cymbal almost the entire time, when he's not doing textural/soloistic stuff. You can hear that the accents on the cymbal vary dramatically— he's not just playing it at an even volume.

All of the slashes indicate 32nd note open doubles. I've also written out the actual 32nd notes. If you want to work some of this out, be looking for ways to use doubles or mixed paradiddle type stickings. I think relatively little of the fast stuff will be played as singles.

Regarding the 32nd note quintuplets— do what you will. What I've written is accurate, but than can be deceptive as to what's really going on. It's really fast, do what you want with it. With much of the fast stuff you can hit main accents and fill it up whatever way is most comfortable to you. Without knowing the actual stickings he used, it's pointless to try to play something weird exactly accurately to the transcription.

The hihat is irregular, and is not integral to the rest of what he's doing. I notice he tends to play it in the middle of the measure. I include it for information purposes; you can play it on the &s, or play it on all the 8th notes, or not at all.