I mentioned to Adam Osmianski that I wanted a 6/8 version of his transcription of the found-music malfunctioning air conditioner drum solo, and he encouraged me to go ahead and do it myself, so here we are. It sounds really hip in 4/4 or in 6/8— it reminds me of Billy Higgins playing on Shimmy Shewobble, which I transcribed back in 2015. Sort of an Africanized march. These versions in 6/8 should be good for filling and soloing during an Afro 6 feel. 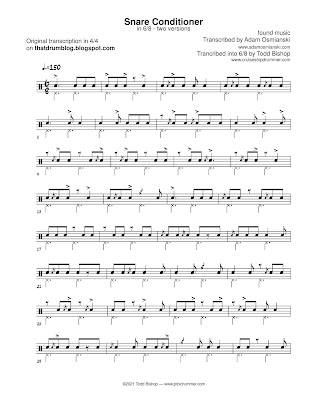 Tempo is about dotted-quarter note = 150. I've given two versions, one with the first note of the recording on beat 1, the other with the first note as an anticipation. The first one has a lot of successive measures leaning heavily on the middle subdivision— see the third and fourth lines on the first page; the second version has less of that. The second one will be a little easier for most people.

Go to thatdrumblog.blogspot.com to get the original version in 4/4.

Get the pdf of the 6/8 versions