Billy Higgins drum solo in 5, on the tune 5/4 Thing by George Coleman, from the album Eastern Rebellion by Cedar Walton. The transcription begins at 5:44.

It's short, kind of a percussion interlude. A lot of Higgins's solos are unassuming, and you have to listen a couple of times to realize there's something very musical happening. You could think he's not really comfortable playing in 5, or hmm he's just playing stuff with his hands over a bass drum pulse. Why doesn't he have more stuff worked out. A lot of irrelevant stuff. He's actually a lot deeper than the superficial elements of what he's doing. I could try to build a case for that, but really you just listen to him, and keep listening, and it's all right there. 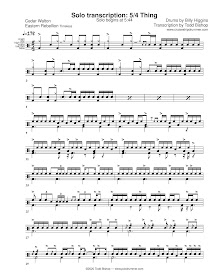 Stickings will be mostly alternating or natural. Generally his singles are not even— the right hand is a little louder than the left. There may be a right hand double or two in the that funny measure 15. That measure looks weird, but it's certainly coming from an organic place. Same with the bass drum in measure 16— it would be hard to play that on purpose at this tempo; I think there's a little slop happening that works out to be musically really cool. There are some tied rolls that are played normally, the untied buzzes are played with both hands in unison— or almost in unison.