Feelings and things you can't do 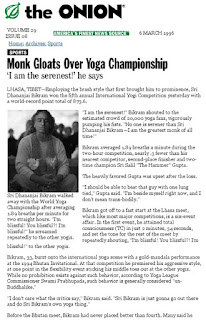 Taking a little break from working on the 2018 Book of the Blog, musing about different stages of attitudes about players who can do things you can't:


I want to be able to do that!
Beginning, early studenthood; you're infatuated with this new drumming thing, and your abilities are all potential, so you don't attach too much of your ego to your abilities relative to other people's.


I can't do that, I suck.
“Serious” student. A lot of people get stuck in this phase for a long time. I'm 51 and I'm just starting to get over it. In this way of thinking, someone who can do something you can't is “better” than you, and since you can't do it, you can't really play.


I can't do that, he sucks.
Slightly more serious student, or defective professional. The other side of the coin from the last one, and marginally less unhealthy. You could call this an adolescent stage, in which you're hostile about  people who are doing something different from you.


I can't do that, I suck, and he sucks! I have to be able to do that!
Toxic-competitive/self-loathing. Learning someone else's thing to prove he sucks. I've known people like this, and don't really understand it. Leads to being bitterly productive, or just miserably bitter.


That is a distraction.
This has been my feeling sometimes. There have been very talented players I have avoided hearing—they were such overwhelming musical personalities that they would blow out the thing I was focusing on. It's hard to be thinking about Billy Higgins or Paul Motian when some guy is blowing a lot of Tony Williams on steroids spectacle in your face.


Why can you do that? I can't do it!
The arrogant veteran. This is paraphrasing something Mel Lewis reported himself saying to a student. Basically: what I'm doing is the definition of the real shit, and doing more than me means you're doing it wrong. It's easier to be this way when you're a top New York player playing at the Village Vanguard every week.


Hooray, there's something I can't do! More to learn!
This is the attitude pervading Steve Smith's personal videos— you really get the feeling that he just loves to practice, and has made a life time project of tirelessly learning everything. Not everyone is an extremely gifted relentless practicer, nor should they necessarily be. At some point we have to be able to declare ourselves proficient, and focus on creating.


I can't do that, but he can't do what I do.
Maturity. There was a video of Jim Keltner talking with Terry Bozzio, Vinnie Colaiuta, and some other extremely able players, and Keltner openly questioned how he could have anything to say about drumming with them in the room, and then stated that this was his feeling about that. It's not so much about competition, but about recognizing that different people have different gifts and different things to say, so being competitive about technical abilities is a little silly.