Here is Joey Baron playing on Don Byron's solo on Resistor, from the Bill Frisell album This Land— Baron's playing on this record is one of the major blowing performances of the 90s. The tune is a mutant blues, and has become canon after a fashion— I'm not aware of a good published lead sheet, but I know a lot of us have been making our own charts for it over the last 30 years. Also check out the earlier version with Paul Motian on drums if you're going to learn the tune. The melody and the tuba riff on the original are the main things on which to hang your playing on it.

Here Baron is playing it with a sort of hybrid New Orleans/Songo groove— obviously those are not the style of the tune, but that's where his drumming vocabulary is coming from. Studying something like this strictly from a drumming perspective, I'm checking out the scope of the vocabulary he's using, how repetitive he is, how he outlines phrases, how much he moves his hands around— right hand moving from the cymbals, left hand moving from the snare drum. Also the nature and level of independence he's using, and how he uses his left foot.

The transcription begins at 1:17 in the track. 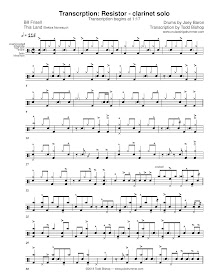 The 8th notes are lightly swinging. The dynamic markings can get a little dense here— most of them apply to the snare drum, or the crash cymbal; some apply to the bass drum. Usually parentheses indicate ghost notes, except in the cowbell part they indicate notes played on the shoulder of the bell. Dynamics are extreme— house top accents are very strong rim shots, and notes in parentheses are very soft.