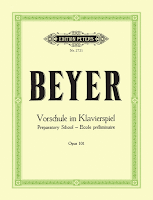 I'm always seeking out methods for introducing people to non-drumming activities— playing the piano, in this case. Last year I bought an 80s-vintage Clavinova, and got some beginner piano books so I could learn how normal people do it— I'm able to hack out the notes for transcribing and composing, but have very little technical ability on the instrument.

One book I liked was Elementary Method for the Piano by Ferdinand Beyer. It was released in 1860, and is still in print in multiple editions, but it does not seem to have many advocates today as a primary method book— not that I can find on the internet. Apparently it remains very popular in Asia. I have the Alfred Masterworks edition, with modernized notation.

Though it was first published over 150 years ago— virtually prehistoric by drum literature standards— it's a very modern method. I mean the conception, design, and apparent philosophy of the materials— I don't know where it stands relative to current views on piano technique and instruction. It will feel familiar to anyone who has seen a lot of drum method books, and is extremely friendly to beginners.

Every page of Beyer teaches basically one thing, which can be learned instantly, or in a few easy practice sessions. There's very little resistance, and the entire book can be learned in a few weeks. By comparison, Karl Czerny's beginner piano method from 1840, still very popular and clearly the more “serious” book, is very dense, demanding a focused, hard-working student right from the beginning.

There seem to be two working philosophies here: the modern how do we teach this so anyone can do it, vs. the traditional sink or swim / devil take the hindmost... that latter possibly reflecting an old world classist way of thinking that less-talented people lacking sufficient Calvinist work ethic should not be doing it.

Beyer's book anticipates the modernist philosophy of making the arts and creativity accessible to everyone, reducing things to their essential elements, developing natural instructional techniques, and rewarding students' early efforts. I'm for that.

Those Drumeo materials represent that gone wrong— rather, they're a purely commercial, educationally degenerate descendant of it. As such they're boring and ineffective, relying on endless novelty to keep “consumers” interested. The more institutional, equally loathsome descendant of the modernist approach is the graded system, which is popular with the British. It has a bureaucratic, run this by Wilkinson in accounts kind of vibe that makes me want to do something else. Any mention of graded materials and I'm Ian Holm in Brazil. I want out.

Conclusion, a method that engages and delivers results to casually committed students is a kind of holy grail of writing. As someone who writes a lot of practice materials it has been fascinating playing through Beyer.


Coda: Speaking of familiar seeming-piano books: Just received Schmitt's Preparatory Exercises for Piano, also published in the mid-19th century, and it is remarkably similar in concept to Stick Control, right down to the “play each exercise twenty times” instruction. They could have called it Finger Control if it hadn't been written 100 years before Stone.
Todd Bishop at 7:36 AM
Share