The 5+3 note phrase is one of the easiest and most useful of Gary Chaffee's basic linear phrases. If you start phrase on the a of 2, the bass drum part makes a Latin tumbao rhythm, which makes it very useful for soloing in music where you want that type of bass drum ostinato. It's easy enough to just play the pattern and move it around the drums, but we can do a lot more with it by making some small changes in the right hand or left hand parts, which is what we're doing here: 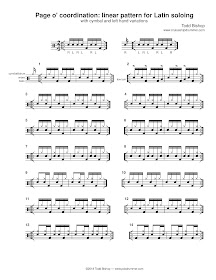 The first two things at the top of the page show the basic pattern in book form, and displaced. The numbered exercises show the pattern with the right hand on a cymbal and left hand on the snare drum, with variations. Pay special attention to exercise 2; I've added accents and moved the right hand to the floor tom on some notes to outline 3-2 Rumba clave.

You can do the usual left hand moves, or just improvise moving both hands around the drums. It'll be more stylistically correct to mix up the articulation/timbre with the left hand— rim shots, rim clicks, doubles, buzzes, dead strokes. You should also vary the accents.

Add the left foot on quarter notes, on the &s, or on 8th notes. Or don't play it at all. It's also a good idea with any Cuban-style Latin patterns to practice getting into the pattern starting on any note of it— don't always start playing it on 1. You may also want to alternate the solo phrases with an equivalent number of measures of a time feel— Songo, Mozambique, or Guaguanco, for example.