UPDATE: Jeez, I'm getting sloppy. Typos in the pdf fixed....

You know, I've never settled on a really satisfactory presentation of Three Camps— the very famous, very old rudimental snare drum piece. It's much simpler than it ever looks on the page, written out, which I take as evidence of its history as an oral tradition.

But I'll keep trying. Here I've written out each individual measure of the piece— there are only four different, closely related things that actually happen— and the complete piece. Don't be thrown by the varying staff lengths, it's meant to be played straight through with no stops. 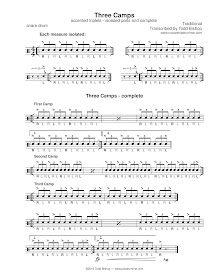 Usually the piece is played with rolls, but I've written as just accented triplets, which is excellent for developing your singles. I suggest trying that with brushes. Quarter note = 260 would be a good goal. Play the unaccented notes as open drags if you want to play it the traditional way. I'm using the modern ending, with a fp and a measure of crescendo, instead of the goofy old school tag used in Wilcoxon, Mitchell Peters, and elsewhere.