I say that every time I post something about him: Ndugu Leon Chancler has to be the player I love the most, for the least exposure to his playing— for years I just had the one record, Reach For It, by George Duke. Here he is playing behind Oscar Brashear's trumpet solo on Blues For Walls, from the Hampton Hawes record of the same name— it should be interesting in light of the funk post from the other day: 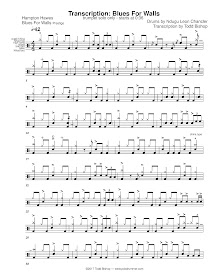 The transcription starts at 0:36 in the recording. Swing the 8th notes— they're not triplets exactly, but they're close. And whoops, we're in half time feel, but I forgot to make the time signature 2/2 rather than 4/4. The tempo indicates half notes, anyway...

Ndugu appears to be playing a five piece set here— at least there are no more than three tom toms being played in the course of any one fill. Cymbalwise, there are hihats, ride, crash, and China type. Hihats are played half-open for most of the tune. Where there is an accent on a hihat note, usually the open sound is also a little more pronounced, which makes sense. Watch out for cymbal accents tied across the barline— often he'll crash before the downbeat, and play the bass drum again on the downbeat, but not the cymbal. There are a few filler ghost notes on the snare drum; it's possible he's doing more of that than is written here, and it's just not audible.