In honor of Yusef Lateef, who we just lost a few days ago, at age 93, here is the thing that inspired yesterday's post: Lex Humphries playing on Ching Miau, a one-chord modal tune in 5/4, played over a one-measure vamp, from Lateef's album Eastern Sounds. The transcription starts at the beginning of the saxophone solo, at 0:29, and ends shortly before the head out: 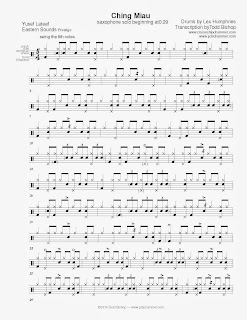 The vamp has the rather unusual 2+3 phrasing, while Humphries's time has a 3+2 feel; I don't suppose the crossing interpretations is intentional; it seems more likely that that is the only way Humphries knew how to play in 5 at the time. He likely plays the bass drum (lightly, at least) on every beat one, but I've only notated it where it's audible.


And to ease Yusef's passing, here is one more tune from that record, The Plum Blossom: