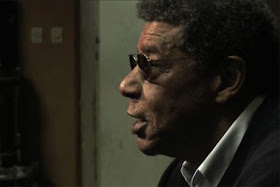 “Take it easy, now... there's no work in this shit, they're gonna jump on your ass...”
— Sunny Murray to a young, interested, Hans Bennink


Here's an interview by Dan Warburton, with one of the original free jazz drummers, Sunny Murray. It's most interesting to me as a piece of archeology into the attitudes of these players, who seemed at the time to be making such a large break with previous music, and who are often regarded as not maintaining, shall we say, traditional technical standards. But Murray clearly feels himself to be part of the same tradition as some more mainstream players (even if McCall and Blackwell were thought of as avant-garde at the time) and having less connection to another great early free player, Milford Graves, who he felt was coming from someplace else:

[...] I like Milford a lot, but basically I have the attitude of a bebop drummer regarding what I feel about music and other drummers. Milford didn't come from bebop at all. I love Roy Brooks, and Louis Hayes with those beautiful mahogany-looking hands, Eddie Blackwell that could just swing your head off, Steve McCall was the best surprise with the left hand I ever heard, Dennis Charles he'd just chug-a-lug you for ever. [...] You know, it's traditional for a drummer to be opinionated about other drummers, because there are some basics and roots in jazz drumming and there's a whole generation today that hasn't had to deal with those rules or laws, aesthetically or spiritually, or go through the kinds of pressures I had to go through, Louis Hayes, Dennis Charles, Eddie Blackwell, Steve McCall had to go through... It wasn't something unpleasant, it was an education.


More after the break:

Q: Do you think that drummers today have got it easy in a way?

Yeah, very easy – they don't particularly have to study music intensively, like harmony or theory or acoustics – they just play, and that's OK. With most avant-garde drummers it's like that. I wouldn't say I'm old-fashioned, but it's like... what's a building without a foundation? I always think avant-garde drummers should find out what they're playing and make a system out of it that can be taught technically to someone. Avant-garde drummers don't teach much because they don't really offer a technical system, they offer the “let's do what I do”.

No, I teach my students basic technique, to work. I want the guy to excel, to make good records, people to think highly of him. I want him to go get a gig, and tell 'em I sent him. “Who's your teacher?” “Sunny Murray.” “Oh boy, he can do that!” I don't want them to say like “Unhh, Sunny Murray, oh he's just a way-out guy that plays like shit...”

They're my tunes on most of the records you hear – not because I don't love bebop tunes, but I just didn't have the cats who could play like that. I couldn't ask them to play “Round About Midnight”, because they'd play it another way. In those days if you didn't play it like it was written, they'd think you were fucking the tune up! Today you can play “Round About Midnight” and play only two or three notes out of it and get away with it, people say “He's making a statement...” My ass, he don't know the tune man!