Two short items: First, someone is sharing what I consider to be the “real” sheet music for Frank Zappa's Black Page— it's the same copy I learned it from in the '80's, and my brother before me, back in 1979 or so. We got it from Charles Dowd, and I assume it's either the original commercially-available version of the piece, or possibly it's Zappa's own studio chart— I don't know if he had his stuff professionally copied before giving it out to the band. First person who gets a chance ask Bozzio about it, leave it in the comments, please.

Also at the link is a recent video of a Terry Bozzio playing the piece, which will come in handy if you want to actually learn it. 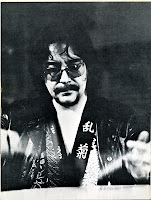 Second, a new addition to our blogroll— a fan site dedicated to Jim Keltner, including his complete discography, with album personnel and notes, photos, and, most interestingly, scans of a lot of rare print interviews. I'll be linking to a lot more from this site.
Todd Bishop at 8:49 AM
Share