A page of Brazilian rhythms

Here I've pulled the snare drum parts from a random selection of bossa nova/samba records— by Baden Powell, Tamba Trio, Milton Banana, and others. Some of these are played fairly repetitively on the recording, some are variations, and played only once. A few of them were played on tamborim, the instrument the commonly-played rim clicks on the snare drum are meant to emulate. 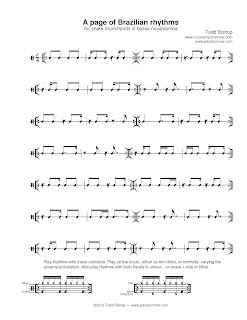 Along with the ostinatos I've given (or a Baião foot pattern), play these rhythms on the snare drum, either as rim clicks, or normally on the drum, while varying the accents/articulation— using rim shots, buzzes, ghosting some notes, or whatever. Once you have the patterns together improvise variations on them— alternate playing the given pattern one time with an improvised variation on it. And play them along with recordings featuring actual Brazilian musicians, not American jazz musicians playing bossa nova style— you'll find that with the Brazilians, the entire ensemble derives their parts from these types of rhythms, and you will fall right into a groove with them.