Hey, we haven't made up a new feature in awhile, so here's one: Todd's routines. I'll outline any of my current practice routines which are unique enough to be worth sharing, but not original enough to merit inclusion in the hallowed Todd's methods series. This is a thing I've been doing with the beginning of the “melodic” triplet section of 4-Way Coordination, by Marvin Dahlgren & Elliot Fine. The first exercise in that section, on page 10: 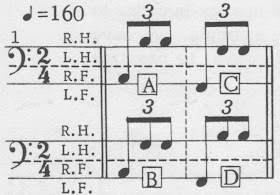 I've been running the first three lines of exercises from that page in a 16th note rhythm in 3/4 time, playing along with Gal Costa's version of the song Baby, by Caetano Veloso, which we've discussed before— if you follow that link, you'll see that there's a 4:3 polyrhythm built into the song's groove:

So, played as 16th notes, every four beat block of notes from the above section of 4WC will fit into a single measure of Baby. Here is pattern A, played four times:

One of the things I like about this is that the quarter note pulse in 3/4 will fall on each note of the 3-note pattern, giving a strong reference for checking the accuracy of the internals of each pattern. Playing the patterns in their original 8th note triplet format (which you should also do), the second note of each pattern is always in an extremely weak spot— the middle of the triplet— which is difficult to reference for accuracy.

More examples after the break:

A and C together:

B and D together:

As I play through them, I will try to count them, and feel the primary pulse either in 3, which lines up with the bass line of the song:

Or in the faster 4, which lines up with the patterns as written, and with the guitar and drums in the song:

So, the basic combinations are:

You can certainly do longer combinations as you learn these, of course. That may seem like a lot of stuff, but once you have them sort-of together, you should be able to play through the entire routine with all twelve four-beat blocks of patterns on page 10, in around 20-40 minutes, maybe 6-12 times through the recording; that's playing each exercise 4 to 8 times each.
Todd Bishop at 3:45 PM
Share