This makes a nice companion piece to the recent Azymuth thing— they're both pretty cheezy, with a lot of big tom tom fills. The song is La Décadanse, by Serge Gainsbourg. I can't find a credit for the drummer, but I believe it's the great British session drummer, Dougie Wright, who was working with Gainsbourg a lot around 1970, when this was recorded. 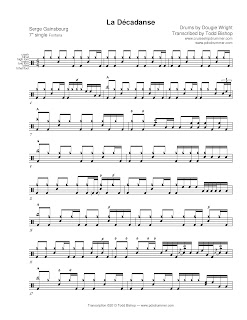 The tempo is slow, so don't flip out at all of the 32nd notes, 32nd note triplets, and occasional 64th notes. Have fun with it.