Fielding a question from the Drummerworld forum here this morning, regarding the underlying rhythm for the rolls in this piece, from Wilcoxon's All-American Drummer: 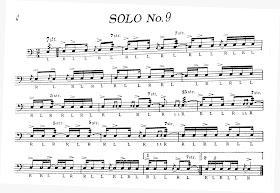 A seven stroke roll consists of three doubles or multiple-bounce strokes, plus a release note, and there are two forms of them here, one of which is rather obscure-looking to modern readers. The sevens at the beginning of the piece, written as unembellished 8th note rhythm are pretty self-evident; you play the roll part as a 16th note triplet starting on the &, and release on 1.

At the end of the third line there is a seven stroke roll written as an 8th note with a ruff at the beginning; which is an old-fashioned way of writing a tap seven, with a 16th note pulsation. In modern notation, that would be written as a 16th note and dotted-8th, with the roll on the dotted-8th— you roll on the “e-&-a.” The 15 stroke roll in the third line would be played the same way, with the roll continued through beat 2.

The presence of ruffs on the same line is a little confusing; usually those are interpreted as an short, unmetered multiple-bounce stroke before the primary note, and seeing them attached to a roll you want to try to play them the same way. In traditional rudimental drumming, though, they're often given a rhythm, and played as a drag on a 16th note— we'll have to go into that another time.

So, line 1 would be played:

Get Charley Wilcoxon's All-American Drummer
Todd Bishop at 7:19 AM
Share