Extending my previous series on making rock/pop beats using Ted Reed's Syncopation, here is a way of making a half time feel using the same concept, except we play quarter notes on the hihat, and catch beat 3 on the snare drum, instead of 2 and 4. The tempo of the quarter note pulse should be bright: 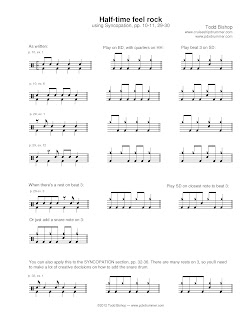 Many of the resulting beats will be useful as conditioners and for gaining familiarity with the feel as anything else; some of them have very dense bass drum parts, and this has a much lower percentage of ordinarily usable beats than the regular rock piece did. You'll have to play a lot of exercises and find the ones that work for you musically.

Listening example and explanation after the break:

Here's an example of a half time feel on a pop song we played on my 2009 and 2010 Europe tours, Serge Gainsbourg's Je Suis Venu Te Dire Que Je M'en Vais (roughly “I came to tell you I'm going”). Notice that the drums and bass are playing in a moderate-tempo two, while the chordal instruments are playing a bright four: