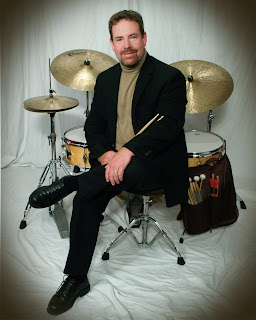 I just got news that an old friend from the U. of O. percussion department, Eric Jones, has died. He obviously went on to do a lot of things since I knew him, but I remember him as the rocker kid with the bleached mullet (we all had them then, and they were called bi-levels) from Randal Larson's studio, who would turn up at percussion events around 1987 or so.

There were a couple of other extremely precocious talents who Randy was teaching at the time, and it was easy to be overshadowed, but Eric was no doubt inspired and challenged by those guys, and fortunately had a couple of important traits for anyone doing music- persistence, and the ability to grow. That latter being key; rock guys don't tend to do well in the college percussion environment, and I've seen a lot of them falter for not being able to get beyond their initial thing.

So, he went on to get his doctorate and have a real career performing and teaching percussion at Hillsdale College in Michigan, but I remember him more for being someone working hard to prove something, which is something I relate to more than instant success.

He was also a fun guy to hang with, and his Charles Dowd Halloween costume was an instant perc department classic, and I'm very sorry to hear that he's gone.
Todd Bishop at 7:44 AM
Share