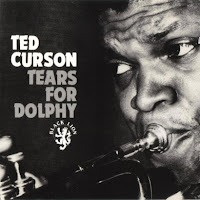 Another great interview from the Jake Feinberg show, this time with Dick Berk of the prodigious ride cymbal. Dick was Billie Holliday's last drummer (after Jo Jones left the group), in a band that also featured Mal Waldron- I think my parents must have seen him with her at the time- and has played with just about everybody- particularly on the west coast- since then. He's also an actor, and had small parts in Raging Bull and New York, New York, and- somewhat strangely- was cast for the role of Sgt. Schulz' son in the canceled final season of Hogan's Heroes. He has been in Portland for years (minus some time in Vegas in the early '00's), and has been one of the anchoring cats for the city.