I really think people don't know what groove is any more— I heard the worst thing in the world on the radio* a few days ago, and I WISH the station kept their playlists up to date so I could show it to you. It was a fairly normal R&B song, set to drumming that was absolutely atrocious in the guise of being hip. I was hoping to AB it with something good, to demonstrate the total absence of the primary quality the drums are meant to bring to music. Alas.

* - Portland's wonderful KMHD, which you should all be streaming online, and supporting.

The opposite of that is Andy Newmark playing on Dream Weaver— from Freddie Hubbard's Windjammer, a big budget album with an all-star orchestra. Newmark is a little bit in Steve Gadd composed-groove mode here, except he's playing non-repetitively— no two measures are the same. We've seen that before from him, even on pop songs. Groove does not require strict repetition, pop craft does not require playing strictly composed “parts.”

And the overt funkiness of the patterns is beside the point— groove is not just “playing funky.” 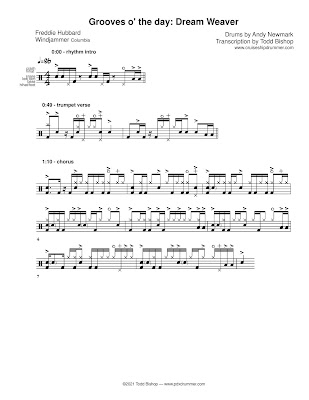 The intro and chorus transcriptions are accurate; on the trumpet verse I've only written the audible hihat— whatever else he's doing with it is buried under the rhythm guitar. He plays the intro repetitively with a couple of fills, everything else on the track varies every measure.