Ending a truly bleak, shameful year— and four years— in United States history, with an ambitious transcribing project. A little act of penance, devotion, purging, re-centering. I'm hoping to clean myself a little with this.

Elvin Jones was one of the supreme artists on our instrument, and one of a handful of creators I basically regard as religious figures. The project is to transcribe his complete >16 minute performance on Chasin' the Trane, the modern epic from John Coltrane's album Live at the Village Vanguard. In the end it should be over 30 pages long. I don't know if anyone will do anything with that, it doesn't matter. Hopefully the only thing that will stop me from completing it is if I hit a lot of untrancribable things as I get deeper in.

I have a lot of history with this record. When I was living in Los Angeles, working for a messenger service, for about four months I had four cassettes in the car. Two of them Coltrane Live at the Village Vanguard, and Coltrane Live at Birdland, and I would just cycle them for 6-8 hours a day. This tune especially I would rewind and play over and over.

There was originally some critical controversy with this album— stunningly. Some critics famously called what Coltrane was doing at this time “anti-jazz.” This track was considered to be particularly offensive in that respect. Here's a sample of that from a Downbeat column from 1962, in which Coltrane and Eric Dolphy were interrogated on their creative direction. Hoping to learn something, I dug this out of the stacks at the University of Oregon library, now you can just read it online:

“At Hollywood’s Renaissance Club recently, I listened to a horrifying demonstration of what appears to be a growing anti-jazz trend exemplified by these foremost proponents [John Coltrane and Eric Dolphy] of what is termed avant-garde music.

“I heard a good rhythm section… go to waste behind the nihilistic exercises of the two horns.… Coltrane and Dolphy seem intent on deliberately destroying [swing].… They seem bent on pursuing an anarchistic course in their music that can but be termed anti-jazz.”

It turns out that what critics say about music is not very enlightening for people trying to learn how to play it. Or for anyone.

With that, here are the first six choruses of Elvin Jones's playing on Chasin' the Trane— about one minute, 14 seconds. The tune is a 12-bar blues, and the tempo is about quarter note = 235. 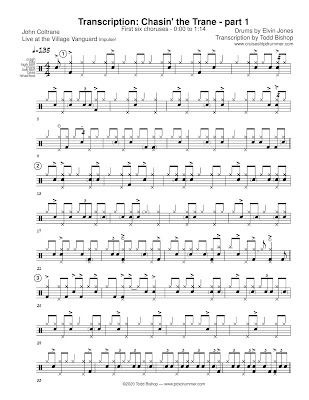 There are a lot of ghosted notes here that are really hard to pick out listening at normal speed— I think I was able to get a pretty complete picture of what he was doing on the snare drum. Not so much with the bass drum— I think he's probably doing more than what I've written, but I could only get shadows of it. All the parts resolve pretty well as intentionally played notes. A lot of times there will be accidental/automatic notes sounding that don't really make sense as anything you would play on purpose.

Generally the timing is pretty accurate. There are quite a few bass drum accents on a downbeat, with a ghosted note on the & before it— that note is usually played very tight to the main note, closer than an ordinary swing 8th note. The only place where I had to compromise a little bit was in the very last measure; Elvin is flailing it in there, you probably should too.