UPDATE: I noticed a typo in the “syncopated / starting on 2” version, plus I changed the sticking on the A measures. Notes on the updates further down...

Settle in, kids, we're going to be seeing several more of these, because a) I like it and I think it's an effective format, b) I can't think of much else to do right now. Times are weird.

This one uses all the basic things found in Alan Dawson's “Ruff Bossa” method— that's a triplet system using all the parts of the six stroke roll, with RLLs, RRLs, RLLRRLs, plus occasional alternating swing 8ths. 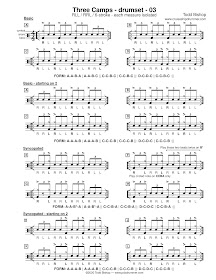 Memorize all four of these and practice them as a complete unit. Alert on the first syncopated version: on the “first camp” (AABA), play the B measure as a full measure of RRL. The swing 8th on the first beat only happens on CCBA parts.

Notes on the updated page:

• The typo in the syncopated/starting on 2 variation was that beat 4 on the A measure should have been on beat 1.

• I changed the sticking on the A measures to include a six stroke roll sticking— RLLRRL. Or you can just play the main sticking for the whole measure— RLL on the first two versions, or RRL on the second two.