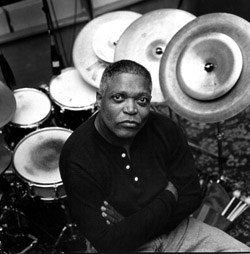 Had a very interesting time at a Billy Hart clinic yesterday at Portland State University— I was sick, and barely made it through the two hours, but I went.

If you came into the clinic knowing nothing you might underestimate the man. He played for about five minutes up front— more creative musing than any kind of demonstration or display— and then answered questions, usually indirectly, in a very broad way, often philosophical.

Which itself tells you something, given the technocratic thing we have going today— everybody expects penetrating analysis, and extended, very detailed technical answers to everything. Or some kind of packaged enlightenment. We really nursemaid people through the learning process.

You really got the impression that he has lived his whole life on the gig, and that the true medium for his intelligence is in playing music. Not drumming itself, not talking about drumming, or talking about music, or practicing, or teaching. Then again, he's 79 years old, and the ultimate veteran; you can understand that he might not be effusive about thinking hard for people and giving up everything to just anyone. But I felt like I was seeing a member of the very oldest school, which just lived through playing, on the gig.

He became well known playing modern music at the same time as some very technical drummers, but as an artist he seems to be non-analytical, closer in attitude to Paul Motian than Billy Cobham. He claimed not to have thought about certain technical things now usually taken for granted as being very important. Listening to him, the overwhelming technique school of drumming seems a little cheap and commercial in comparison.

Since there is no such thing as being a better drummer than Billy Hart— he has over 600 album performance credits, with the best people in the world— I think the big lesson here is that playing intelligence is its own thing, and different from all the things we do as musicians that are not actually playing music with humans. I felt like I was seeing a consummate player— distinct from all the other roles we have as professionals: sidemen, accompanists, soloists, featured artists.

From memory, a few quotes:

On Stan Getz: He was performing his whole life, and never really got a chance to grow up. So if he did things that were selfish— little kids do that, and nobody hates them for it.

Response from a bandleader when Hart requested charts and a rehearsal: You don't use charts on this band. Play the dance.

On an anonymous phone call: They said, “Love is the highest form of intelligence in the universe.” I'm still trying to figure that one out.


There were other bits I can't recall clearly enough to make a decent paraphrase:

• Seemingly mystified by what motivates some drummers (“I guess they like hitting drums.”)

• Saxophonists asking why he chose the least technical of three masterful takes of a track with Chris Potter.

• I was amused that nobody in the room, which included some great players, could name the drummer on Hub-Tones when it came up. “It's on Blue Note!” said Hart— he finally remembered that it was Clifford Jarvis.

• Said that focus on what is current or hip right now is really a corporate, consumer mentality.

• Remarking that he must have looked very stunned when Miles came up and enthused about his playing, and told Hart he would call him when he needed a drummer— Miles finished by leaning in close and saying “OK?!”