This is based on a page I wrote in 2012— I was using that with a younger student, and marked it up so heavily that it was unreadable. So here's a clean version of what we were doing with it. We've got the RLB linear pattern played 1-3 times, in some rhythmic variations/inversions, to help get the coordination, and to learn to not just see the pattern one way. It also ties in somewhat with the hemiola funk pages, which I was using with this same student. 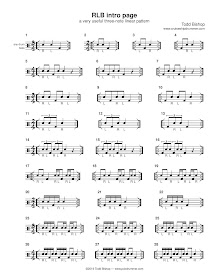 Play the right hand on the hihat or on a tom tom. Play the left hand on the snare drum or a tom tom. Then move them around. Play the patterns repeating, as indicated; also play them one time, fast, with a long pause after— mainly 2-16, and 20-22.