I heard this on the radio yesterday— Soft Winds, from Chet Baker's album In New York. Philly Joe Jones also had a cool drum solo on it, played with brushes. Drumming right now is in a rococco-like ornamentation-obsessed phase, and Joe's solo here is refreshingly clean, deliberate, unadorned. It's sort of a bebop miniature. The way he plays the figures on the head is also really cool.

The tune is a blues, and the solo is 24 bars long— two choruses. The transcription starts after 4:30 in the recording. 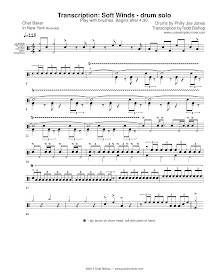 In bar 5 he plays a tremolo with one hand and makes the accents with the other. In bars 17-19 he lays the brush on the drum head and rolls it in rhythm with the palm of his hand. He probably does these moves on video somewhere, and if so inclined you could track them down and see exactly what technique he's using.