Some excerpts from a very large transcription I'm working on— Max Roach's entire performance on Freedom Suite, by Sonny Rollins, which I plan on releasing as an e-book. All 19 bloody minutes of it. These excerpts from the first section of the piece highlight Max's rubadub-like thing I mentioned in the linked post.

The concept and underlying pattern is almost exactly the same as Mel Lewis's thing*, except Max maintains the complete cymbal rhythm, which stays in 4, or shifts backwards/forwards once or twice in a four bar phrase— it doesn't have the running 3/4 feeling of Mel's thing. Max's thing really seems to hang off of a RLRR RLRR sticking pattern, in swing 8th notes; there are a lot of snare hits on the & of 1/3. Hit the link above to see that broken down.

* - That is, Mel Lewis's thing as we've been exploring it on this site— which is entirely based on Chris Smith's very helpful explanation of it. I need to make some transcriptions of Mel's thing and get a clearer idea of how he actually played it. 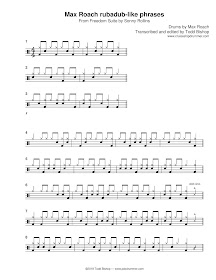 To highlight the idea we're studying here, I've removed all dynamics and articulations, and edited a few of them slightly. Many of the four bar examples can be played two bars at a time, repeating. On the recording there is very little audible hihat played with the foot; you can play it on 2 and 4, or leave it out.

I've been focusing on how this connects to Mel Lewis's playing, but also see Billy Higgins's playing for something very similar to this. Higgins was a generation later, and was very influenced by Max.