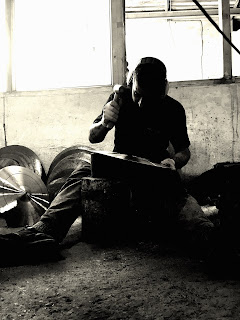 As you know, I just made another cymbal demo-and-delivery tour to Germany, with a side visit to Istanbul to meet Cymbal & Gong's production team... which is just a bunch of guys working in a really grungy metal shop in the city's vast outskirts. It's insane, the cities I slept in the last four days of the trip: Saturday - Istanbul, Sunday - Berlin, Monday - Reykjavik, Tuesday - Portland. Taking a flight a day for four days, going to and from the airport, is itself a little silly, but by the end we were traveling light, and it worked out OK. Visit my Facebook feed to see pictures and video from the tour.

A few notes from the tour:

Cymbals in Turkey
One thing I realized on this visit to Istanbul is that Cymbal & Gong cymbals— consistently the finest traditional handcrafted cymbals in the world, I believe— would not exist without proprietor Tim Ennis.

Obviously, it's his company, so yeah. And he does rely on master Turkish cymbal smiths to realize them and produce them.

BUT: Having met Cymbal & Gong's smiths, and played a few dozen of other Turkish brands' cymbals: the C&G product is unlike anything they are producing on their own. Creating a traditional 50s-60s sound could not be further off their radar. In the shops, a lot of what I played seemed to be designed to stand out in a drum shop environment. As musical instruments, I found maybe three things I could actually use... if I didn't know C&G was out there, and was better. Even the things with a famous jazz drummer's name on them, I get the feeling they're getting it right (occasionally) by accident. There's a large disconnect between what is being produced, and why, and what I want/need as an artist. 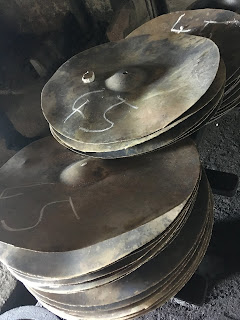 So, for Cymbal & Gong to happen, somebody who knew what a good, normal cymbal is had to go to Turkey, find the right guys, get them to make it, and have it be consistently excellent. Not a simple process in itself, considering the distance, expense, a significant language barrier, and music-cultural difference. Try it some time.

I knew Cymbal & Gong was a big deal because I always had a hard time finding cymbals I liked, but yeah: what they are doing is a really big deal.


Cymbal & Gong vs. Ks and others
I did get to play the C&G Holy Grail cymbals next to some Istanbul K Zildjians, and a Spizzichino, and several cymbals by a boutique shop in Germany which modifies 30th Anniversary Agops. Both Ks were interesting; one very nice, one a little funky, but playable. They were both clearly in the same family of cymbals as the Cymbal & Gong, but a little mellower; the C&G had a slightly brighter edge, with more highs present. The Ks sounded a little prettier by themselves; but I, and others I've spoken to, find that their sound tends to get lost. The C&Gs have a true traditional sound, but cut better.

And both of the Ks were idiosyncratic; there were things about the way they handle as instruments that I would have to work around when playing music with them. There were aspects of the sound that I would have to handle with care— to varying degrees. To me the Cymbal & Gong cymbals are better realized; they do all the right things when you want them to do them, with any kind of stick. Soft ride sound, strong ride sound, explosive crash, accent, bell sound. There may be some idiosyncratic examples, but I don't select them for sale on my site.

The Spizzichino is owned by Michael Griener, a great drummer in Berlin who has been extremely supportive and helpful in getting these cymbals and me to Germany. To me that cymbal had a sound 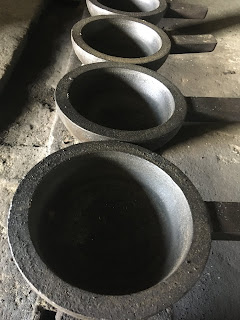 like a Paiste 602 version of a K[???]— a clean, very pretty K-like sound, distinctly different from what Cymbal & Gong makes. It had a certain quality that bothered Michael, and I believe he now mostly uses a 20" Mersey Beat instead.

The German modified Agops were clearly specialty items— extremely rough and dark sounding, for me barely controllable as musical instruments. The player who owned them was having a hard time with them, too. I think this is a problem in the cymbal-fetishist world: we get these “amazing” sounding cymbals because they sound amazing in a drum shop, and then take them onto a job or session, and they just don't work right.

Let's talk a little more about the cymbals I played in Turkey: there were a lot of “fascinating” cymbals, three or four that I normally would have considered buying, one that I did almost actually buy (a 20" lightish Mehmet Turk). They weren't terrible. Generally speaking, they all had a “dark”, distantly K-like sound. A number of things seemed to be going for a Chris Dave-like noisy, dry, trebly, rattly sound, which I can't really use. The qualities that made me reject most of them were that they were interesting-sounding in a way that detracted from their usefulness as an instrument; or they clearly would not do the things I listed above the way I want (soft ride, strong ride, explosive crash, accent, bell); many of them had qualities that just sounded wrong— something about the tonality is not what I want in an instrument. You can tell when you crash something, and the crash sound is just off. There was a lot of that feeling of not quite making it.

After the break are a lot of thank yous to various people and entities: 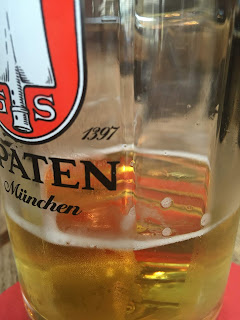 Shoutouts to Michael's double bari quartet, and the Golden Horn, Bosphorus, and sea of Marmara; the rivers Spree, Isar, and Elbe; and Starnberger See for the fish and mosquito bites. Istanbul for blowing away all expectations. Iceland for being such a favorable habitat for lupines. Why is the Iceland flag blue, white and red when it should be primer and distressed chrome colored. Istanbul, home of cats, dogs, parrots, hair-raising traffic encounters and usually easily-thwarted touts. Special shoutouts to the hilarious drinking guys on the morning Berlin-Dresden bus, and the comically gargantuan, ill thought-out new Istanbul airport. Thirty Years' War tree for surviving the encounter with Jakob, and the Cameroonian dude in Kleiner Tiergarten, chilling alone with the tunes CRANKED, with a bottle of whiskey and some mixer.
Todd Bishop at 7:38 AM
Share