Back to posting drum stuff after a shocking, depressing last week, with the massacre of a lot of innocent humans in New Zealand. Here's some music for anyone still struggling to find their equilibrium.

I was thinking about what the space alien said to the main character in Stardust Memories:


“You're not the missionary type. You’d never last. And incidentally, you’re also not Superman; you’re a comedian. You want to do mankind a real service? Tell funnier jokes.”

So back to drum stuff.

Here is Lex Humphries playing a very functional Latin groove on Abana, by Yusef Lateef, on the album Jazz 'Round The World. It's a modal jazz tune with a Latin flavor; the cymbal rhythm is a common one used in Cuban music. Only the hands are audible on the recording. Tempo is around half note = 125.

To add some feet and make this into a full drum set groove, start by learning it with the hihat on beats 2 and 4. I've encountered Latin players who don't like this, but many jazz musicians will expect it.

These are some different things with the bass drum, ordered from “more functional in a jazz combo” to “more authentic”: 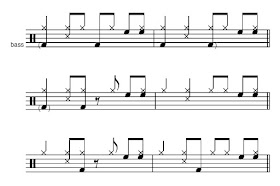 The bass drum on 1 and 3 way is very north American, but also more useful in a jazz setting than any of us want to admit. Play the bass drum very softly if you're going to do that.

It looks like I chose something for which there is not a convenient link from the usual site. Looks like you'll have to buy the album if you don't already own it.
Todd Bishop at 11:33 AM
Share