Further exploring hemiola rhythms in various meters and drum set orchestrations... there will be several more posts like this coming soon. It's a simple idea that nevertheless needs to be written out, and it takes a lot of ink to run it through all of the permutations... I'm not sure to what end. We'll see when we're done. There's something very fundamental happening here, both rhythmically, and as a piece of drumset vocabulary.

It's a three-beat idea which I've written in 3/4, 2/4, 4/4 (single measure, and repeating over three measures), and 5/4, starting on each beat of the pattern. Since the pattern doesn't fit into a single measure of most of those meters, it has to be shortened. I've also written some of the patterns in an inversion, with the pattern starting on 2 (in 2/4) and on 3 (in 4/4). I've seen that kind of hemiola inversion in Brazilian music and DC Gogo drumming. 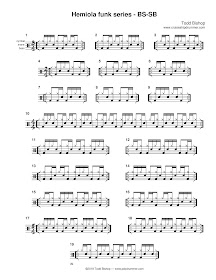 No page in this series should require a lot of practice. After you learn the first pattern in 3/4, the other practice patterns are the exact same thing, with slightly different orientations. To get full value out of this, you need to hear them in context; play them along with any practice loop of your choice.

You can experiment with a few easy creative moves to make the patterns sound more like real funk vocabulary:

• There's no snare drum backbeat in these patterns. Where possible, accent the a of 1 or 3 on the snare. Where there is a bass drum on 2 or 4, play the snare drum instead.