How to play Autumn Leaves

Playing Autumn Leaves should be a no brainer for a drummer: it's an easy standard, and one of the first tunes everyone learns. No problem, except some players always do a certain zombie jam session arrangement of it, which frankly is not happening. You're probably familiar with it: a dotted-quarter/8th note stop time rhythm on the A sections, and then swing on the B and C sections. People learn to do that the first time they play the tune, and never really think about it again. The tune is so commonplace it's like oxygen, which is a good reason to go back and think about what we're really doing with it.

Let's back up: Autumn Leaves is a 32 bar minor key tune with an AABC structure. In jazz settings it is usually played at a medium to medium bright tempo with a swing feel, or sometimes as a ballad. 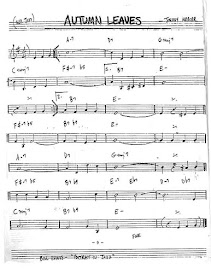 When played at a medium tempo, on the A sections people will often play the stop-time rhythm written below the staff:

By the end of the second A section, everyone is thoroughly sick of hearing it, and there are always one or more players who aren't sure what to do in the last two measures before the B section. I actually don't know where the idea came from— the well-known recordings all have steady time going behind the melody. The piano and/or bass may play that rhythmic figure (often with variations) interactively with the melody, and sometimes the drummer will accent it too, while continuing the time feel. On 60s recordings Miles Davis plays the opening pickups, and the band comes in on the first figure, and continues playing time— a good option.

Better players will be aware of many recorded versions of the tune, and you should too, so you know some directions people may go with it, or that you can allude to with your own playing.

The Miles/Cannonball version and the Ahmad Jamal version have similar dark-sounding intros, and there are later versions, for example by Wynton Kelly, with a similar vibe. Ahmad goes on to have a very involved arrangement which never goes into normal jazz time.

Bill Evans's Portrait in Jazz version has a different intro, with Scot La Faro playing a repeating rhythm on the A sections, and an ensemble rhythmic figure in bars 5 and 6 of the C section, which is repeated at the very end of the tune.

The 80s Wynton Marsalis Standard Time version has a rather contrived rhythmic arrangement by Jeff Watts, which many people are aware of. Some hot-shit players may be able to jump right into it if you quote it in your playing, and you feel like courting disaster.

This version by Keith Jarrett is one of my favorites— nothing more to say about it than that. Like in the Bill Evans version, the bass takes the first solo.

That's a good basic working level of knowledge of a tune for a drummer. You should of course be able to sing it— badly— and it's not a terrible idea to learn the lyrics, too. It's a super-familiar tune that many of us doze through playing, but it's good to give this level of attention (at least) to every tune we claim to know— especially ones that get played a lot, and that have been recorded a lot.
Todd Bishop at 3:01 PM
Share