I'm back from Germany and am deep in the throes of jet lag and a bad cold, and will resume normal posting soon. I had a really great time meeting, hanging out with, and bringing cymbals to drummers in Berlin and Dresden.

Big shoutouts to Tim at Cymbal & Gong, and Michael for instigating and facilitating this whole thing. Shoutouts to Sebastian (and family, for letting my wife and I intrude on cookie day), Moritz, Tim, Valentin, Manuel from Augsburg, Heinrich, Joshua, Paul, Claas with the Laphroaig, André who charged in at the last minute and bought a 22" ride five minutes after playing it. Also to Ernst, Martial, Yorgos, Felix, Tobias, Simon, Dag, Pablo (I think!) from Barcelona, and all of the drummers at Hochschule für Musik Carl Maria von Weber in Dresden. And to Carlos in Mexico, who bought a really nice 22" ride right before I left, and Jens from Rotterdam who sat in when I was playing at Hat Bar in Berlin on the 9th— and Jonathan from Toronto for taking me on for that, and playing the gig despite obviously being deathly ill.

Shoutout to Delta for squeezing more people onto an international flight than was heretofore thought possible, and Schiphol Airport for obviously operating at way over capacity. Bonus shoutout to KLM for being way understaffed at Tegel, and for sending my luggage (and a lot of other people's) to Canada, which was nowhere on my itinerary... but at least they didn't squawk when I carried two 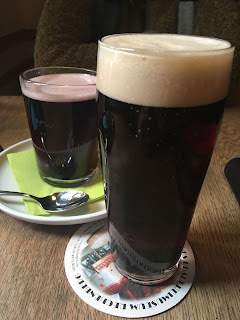 really heavy cymbal bags on the plane. Also to an anonymous baggage handler in Berlin who dealt with a mob of baffled foreign passengers with great composure and style— Germany is apparently full of rough, charismatic working class guys who totally have their shit together. My experience, anyway. Shoutout to Woolworth's on Potsdamer Straße, where you can get fresh t-shirts and underwear when KLM loses your luggage. Shoutout to Tabac deodorant.

Shoutout to Berlin for being a truly incredible city, and Dresden, in a different way, and Germany in general for being infectiously great. Shoutout to Planwirtschaft in Dresden for the schnitzel and bockbier, and Pivovarský Klub in Prague for the lunch specials and great scene. And to 500 ml beers and every kebab shop in Germany. Shoutout to the ice skaters and the street guy in Alexanderplatz who was screaming violently at someone one moment and asking for a cigarette very coolly in the next. Shoutout to all the glühwein, good and bad.
Todd Bishop at 5:20 PM
Share