Gary Chaffee's linear system— found in book 3 of his Patterns series— is a major entry in the literature of drumming, but it has always felt unfinished to me. There are some extra steps required to put it into a musical context, and I was never able to improvise a way of practicing it that I felt was very effective.

Here I've organized the patterns to end easily with a cymbal and bass drum on beat 1; you'll notice none of the measures end with the 4, 6, or 8 note patterns, which end with two notes on the bass drum— meaning you have to play three in a row to make the crash on the downbeat, which I don't like. I've also included some fills that end with just the hands: RLRL.

They also flow easily from a cymbal and bass drum note on beat 1. When you're playing time, it's easier to do that than it is to start the fill right on 1. We're aiming to exploit the path of least resistance here. 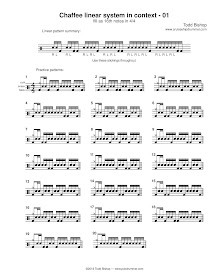 Use the stickings at the top of the page, and vary the accents/dynamics. Play each pattern many times, then play them as a fill in a two or four measure phrase, improvising a groove in the other measures. Move your hands around the toms, or keep your right hand on the hihat or ride. I don't think there's anything to be gained by first learning the patterns in a “neutral” way: at an even volume on the snare drum. Except maybe the very first time you play them; after that, move them around, play dynamics, and make them sound like music.