Here's the promised transcription from the previous entry in this Evolution of Songo series— the breakdown from Pero a Mi Manera by Los Van Van, with Changuito playing the drums. For most of the tune he plays the transcribed groove from the last post; during this breakdown he plays something very much like the modern Songo pattern most of us are familiar with. The transcription begins at 2:19 in the track: 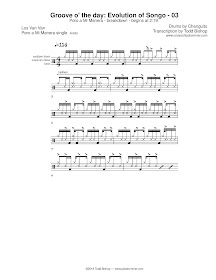 The right hand part is played on a catá, but you can substitute a jam block or hihat; left hand part is played as rim clicks on the snare drum. In the third measure the rhythm is played with a rather triplified interpretation— the left hand part has a strong pull towards an inverted quarter note triplet rhythm. As you've probably noticed from the previous Songo posts, the 16th note rhythms have a legato, triplet-like feel overall, that is similar to the Brazilian swing interpretation we discussed a few years ago. In the 8th measure there's a 32nd note/dotted-16th note rhythm; it's sort of an inverted flam, with the first note landing on the beat.