If you watched that video of Jabo Starks playing with John Scofield et al, you'll notice that he does some hip stuff on the bell of the cymbal behind the trombone during the bridge between solos. Here's a page for working up that independence— but it's mostly an excuse for spending a lot of time copying the way he plays his bass drum, snare drum, and hihat. 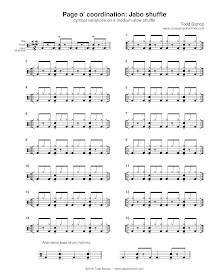 If you watch the video carefully, you'll notice that although we're hearing a strong quarter note pulse (dotted-quarter, since we're in 12/8), he's actually not ghosting any part of the bass drum rhythm, as I've notated here. I've given a couple of alternative bass drum rhythms— you could also practice all three bass drum rhythms leaving out the notes in unison with the snare. There's also a little more going on with the snare drum than just the backbeats I've indicated here, but they're basically inaudible. The backbeats are what you should be thinking about. And notice that the snare drum backbeats aren't perfectly in unison with the bass drum— they fall a little late, so there's a big, fat flam between the two drums. It would also be worth it to spend some time copying his hihat technique— he taps his heel on 1 and 3, and plays the hihats with his foot on 2 and 4.