Here's something you can do with that silly “both clave directions at the same time” idea. In clave-based Latin music, the clave rhythm is often not played with a strict march-like execution; the 4/4 version often pulls in the direction of a triplet rhythm. It's a feel thing. With the simultaneous claves thing it's easier to get the rhythms precisely accurately, and easier to find the subtle gradation between the 4/4 and triplet versions. These exercises will help you develop some flexibility with it, so you can find the correct thing through listening to music and playing the style with people.

This exercise requires combining the duple and triplet versions of clave, usually written in 4/4 and 6/8; I've written it in the form I'm guessing will be most understandable to the most people: as dotted 8th-16th and 8th note triplet rhythms in 4/4. Not a big deal, it's just not usually how the rhythms are written. 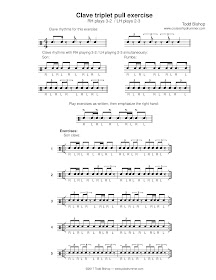 Nail the exact rhythmic changes of the exercises, with both hands at an even volume, then practice them emphasizing the right hand, de-emphasizing the left. Then do them emphasizing the left hand, de-emphasizing the right. You can start the exercise on the first or second measure; starting on the second measure will give you 2-3 clave with the right hand, and 3-2 with the left. Keep in mind that there's really only one clave happening; the off hand rhythm is really just a check pattern to help you play the rhythm accurately. To actually state both clave directions at the same time is a mistake— a big enough and common enough mistake that they have a word for it: cruzado, meaning crossed. At best consider the off-hand, backwards clave part to be an entry point for developing independence with that hand.

Note that exercises 5 and 10 have a tenuto mark on the first note of each measure— usually that means to hold the note to its full value; here we want it to actually distort the triplet rhythm a bit, pushing it a little closer to the 4/4 version of the rhythm.