I think we're going to be seeing a lot of Ngugu Leon Chancler around here in the near future. A group I play with plays a lot of 70s funk tunes, so I'm listening to a lot of funk, and Chancler has stood out as one of the most interesting guys to listen to. On the stuff I'm listening to, he makes a perfect balance of playing the funk and the setting, and making a statement as a player. There's a lot to be learned from him about playing funk effectively. So here's a cool little eight bar drum break from 1000 Reds, from the David Axelrod album Seriously Deep. It happens at 1:40 in the track. 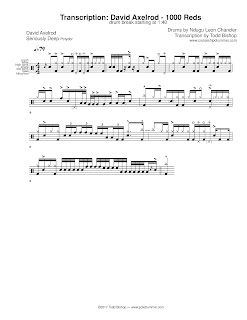 On a lot of these 70s records Ndugu sounds like he's playing a normal 5 or 6 piece set with a couple of extra concert toms— either 8"/10" or 10"/12". I don't know if this is the Yamaha set he used later on Billie Jean, but it's at least a similar set-up. I would spent some time learning and messing with each of the 32nd note/sixtuplet fills. Which drum they're on is not important.