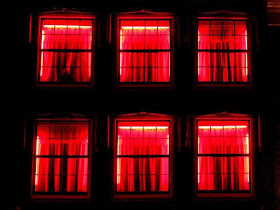 Not to hire one, to be one— good not to have too many illusions about our economic place in society, as musicians. From the Quartz web site, an excellent piece on business negotiation as practiced in one of Nevada's legal brothels, from which musicians can learn a lot. If you've ever led a commercial band, or tried to book a tour, you'll recognize many of these situations immediately, and hopefully see what you're doing wrong, and what you can improve on in the future. There are also some good angles to think about in structuring your teaching business. Do go read the entire piece.


1. Establish a connection. The negotiation begins the moment the counter-party lays eyes on the escort. She smiles, says her first and last name, displaying a confidence and warmth that puts the customer at ease and projects value. Almost no one likes to negotiate. The woman’s friendly self-confidence not only makes the counter-party more comfortable, it puts the escort in control.

After the lineup, the woman takes the customer by the hand, the first point of physical contact. They walk side by side—never one in front of the other, as they tour the ranch. As they walk, they talk about why he’s there, his background, and his hobbies and interests. One escort got a large booking ($6,500, up from her usual $1,000) because during the tour they connected over a similar childhood in the Southwest. Forging a connection creates power in the negotiation. If a customer is attached to an individual, he is more likely to meet her price.


2. Don’t talk about money or time initially, just the service you’ll provide. The women are instructed to describe an ideal scenario while touching the arm, leg, or hair of the client. They don’t bring up money or how long it will take until the client is hooked and wants the full service. Instead of leading with how much they’re worth, they describe their value in a way that’s appealing to the counter-party.

Hof described it this way:

'The guy’s, like, “Well, I need four hours and I need to do this and I need to do that.” What I would tell her to say is “We’re not going to have to worry about time. We’re going to have plenty of time together, all the time that you want, because I’m not rushing you out of here because I want you to come back.” Now, you just eliminated the whole discussion about time. Then the guest says, “Well, how much time do I get?” “You get what you need. I’m not rushing you out of here.”'


3. The most controversial question is whether to say the number first or let the client. The younger women always make the client say what he’s prepared to spend first. It’s hard to tell how much money a client has. Some of the less flashy looking clients ended up spending hundreds of thousands of dollars. If they say the number first, they risk low-balling themselves.

But Hof and the older women like to say the number first. They say it sets the tone and takes control of the negotiation. They don’t worry about saying a number that’s too low, because if the client readily agrees they then go in for the more expensive service and still get more.

I asked negotiation expert Adam Galinsky, a professor at Columbia Business school, about who is right. He studies the power dynamics of negotiations in other industries. He agrees with Hof that it is better to say your number first. That’s especially true when pricing is not transparent (as it is in the brothel). It gives the seller more power if she throws out the number first. It also frames the discussion and puts the prices in a higher range. “It is better to make an ambitious offer and give yourself room to concede—unless the other side has more information [on pricing].”


4. Offer options. They key to getting more money is offering more services. It leaves room to lower the price if the number thrown out is too large. The escort can lower the price by removing services. That makes the negotiation less contentious because no one feels like they are losing—they are simply making trade-offs. Says Hof:

“I teach them to start high and work their way down and try to add more benefits, time, activity for fun things to do at the ranch (go swimming, eat here). [I tell them to] try to add those things as more benefits before you come down too far. I teach them that in any sales scenario, it typically takes six no’s to get a yes for the kind of money that you want.”


Galinsky says offering options is key, because “it gives the buyer permission to pay more because he feels like his preferences are being met.”


5. The negotiation never ends. The most lucrative parties are GFE [Girlfriend Experience] overnights, which often fetch more than $10,000. Clients may be reluctant to agree to that initially, in which case they start with a smaller party and revisit the possibility of more time later on.

Hof also sees the value of a long-term relationship with a client. He tells the women to say they are offering a special low price (just because this client is special and worthy of being one of a few select regulars), if he offers to return.

“And what you want is a willing buyer, willing seller, and a repeat client. Now, don’t charge him so much he’s not going to come back. That doesn’t work. You know, I’d rather see you have $500 every week for the whole year than $1,500 dollars once.”


There is an art to getting the most money you can, while still building a long-term relationship. About 60% of the business is repeat clients.


6. Do your research. Hof claims he doesn’t encourage it, because he thinks it is demeaning and will make some women feel bad, but the woman talk to each other about what they charge. Knowing how much others get empowers the women to ask for more. Many said they asked for too little in the beginning, but once they learned what others got, they demanded more.


7. Get comfortable with money. Anyone must understand, and be in control of, their money in order to talk about it. It’s one reason why the brothel offers extensive—and remarkably effective—financial literacy training. Many women come to the brothel shut out of formal banking and have poor credit. At the brothel they work with a private banker to repair credit, establish savings accounts, IRAs, pay taxes, and secure car and home loans.

The women I met spoke fluently about the index funds their IRAs were invested in, and what sex toys they can deduct come tax time. Alice says about when she started:

“I didn’t have a savings account because I was really living paycheck to paycheck. I was a small business owner that was investing everything right back into my business, trying to grow that as much as possible. It was hard.

Right now, I’m just in index funds for the most part. I do have a rental property that I’m currently renovating. It’s a very, very large project. And I also have a small business that I am opening. I recently acquired a 30,000 square foot school that I am turning into a bed and breakfast.”


Hof encourages women to have financial goals they actively work toward. Being financially literate motivates and makes women more comfortable dealing with money. He says:

“First, the first thing we do is goal setting. What do you want? What are you trying to accomplish? Without a goal, you’re not going to be successful. You’ve got to have a roadmap to get going.”

8. Negotiation is never personal. Most of the women claim they are rarely insulted by a low offer. Even if he counters with “you’re not worth that much.”

The counter-party is looking to spend as little as possible, it has nothing to do with them. Like Hof says, it takes six nos to get to a yes. A low offer is not an insult; it’s an opportunity to explain their worth and should never be taken personally. Says Hof:

9. Be prepared to walk away. The escort must be able to recognize when someone won’t meet their price and feel okay about saying no. There is an opportunity cost to taking a low offer. Hof encourages the women to never take “less than they are worth.”

But this can go both ways. I watched one man go from woman to woman offering just $200 for a 40-minute GFE party. He got no takers. After he ran through almost all the women in the house, he mistook me for a prostitute and asked if I’d negotiate with him. The better negotiators recognized he wouldn’t come up in price and walked him to the bar to see if someone else would service him. Hof says 50% of negotiations fail, but that is not always a bad thing.

One woman we spoke to, who goes by Harley Lane (not her real name), explains:

“So I might do a $3,500 Girlfriend Experience party for an hour, but the guy might only have $800 and might want the same party. Well, I can’t, you know, down-sell that type of party. It is a specialty. I wouldn’t mind if it was just myself–because I want them to feel good—but other girls in the house who offer that type of party are asking for a similar price and if you sell that too low, then that hurts the other girls and it’s going to make it harder for them to make money too.”


10. Confidence is key. Being a good negotiator requires healthy self-esteem. The brothel takes steps to build self worth, by offering advice on make-up, clothes and celebrating success with designer handbags. The women I spoke to said they gained confidence from having men pay so much money for them. High, frequent bookings are rewarded with larger bedrooms and being featured prominently on the web site.

But not everyone thrives. Some women who were not top earners described feeling inadequate if they are rarely chosen in line-ups, or about their negotiation skills. Like any job where people feel undervalued, these women needed to let me know how good they are, even if others don’t recognize it. They described to me their extensive sexual skills and listed famous (I assume famous…for something—I never heard of any of them) lovers they’d worked with in the past. It reminded me of a former graduate student, who hates his job, bragging about famous members of his dissertation committee. One woman (who didn’t want to be named) described her frustration:

“No, this has been the hardest part for me, this negotiation part. Also, dealing with the line up…everything I’ve done [before] is very different or when I’ve worked before in a service in the past, the arrangement has been done for you and there’s no kind of competition. Guys just call the service and they find out what girls they’re into and the madam or whatever you call it would say what’s special about each person and, you know, sell them.”


She told me, she earned more working for an illegal service that set the prices for her. She blames her poor negotiation skills, but she has only been at the brothel for a few months and thinks she’s getting better. Like any job, some people thrive in an entrepreneurial role and feel validation from their success. Others prefer to show-up, do what they are told, and get a certain amount each day. The second type aren’t as successful.