Here are the drum performances on two versions of the very famous theme song from the TV show Barney Miller, which ran from 1974-82. The show was in syndication for many years, so the tune is well known to several generations of musicians. I sure watched a whole lot of it. The first version is by Sol Gubin, from the first season of the show; the second is by the great Paul Humphrey, from the third season. They're both playing in sort of a John Guerin studio funk bag, with the concert toms and everything... 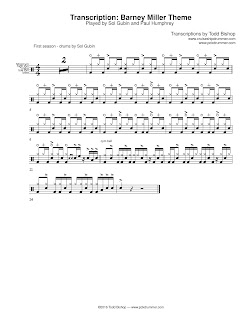 The ending four measures of each version is played on the bell of the cymbal, and there's a third tom tom and crash cymbal used on the second version. You may need to work out some stickings on the fills on the Humphrey version as well. The drum sounds are classic 70s.

A favorite episode is after the break, if you've never seen the show...