Make your own practice loops

I have a saying: Give a man a fish, and he'll eat for a day; teach a man to fish, and you shift the burden away from yourself and wash your hands of all responsibility when he starves to death. Thus completing your shameful descent into moral bankruptcy.

I forget what my point was, but here's how you make practice loops! This will be oriented towards Windows users— I assume you Mac people already know how to do everything in the world, and will never get sick or die. If I am mistaken in that assumption, you'll have to look in your menus for the equivalent Apple keyboard shortcuts for the ones I give here. But here we go:


1. Get some music in computer format: mp3, wav. If you're like most people you must have a few terabytes of pirated music lying around. Use that.


2. Get Audacity. A very handy free audio editing program. You will probably also want a version of LAME, an open-source mp3 encoding program which will let Audacity export your finished tracks as mp3s. Otherwise all of your loops will just be giant uncompressed wav files.


3. Open your digital track in Audacity. I don't need to tell you how to do that. OK, looking at your mp3 file in Windows Explorer, right click on the file name, go to open with, select Audacity. 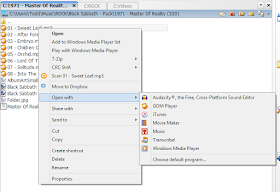 When the program opens, you'll see this: the Audacity interface, with your audio track visually represented on a timeline: 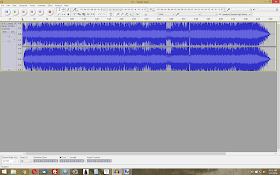 I know we're kind of light on things you didn't already know so far— the useful part is all after the break. Read on...


Before you do anything more, hit Ctrl-shift-S, or go to File>Save As to save a work copy of your loop— you don't want to accidentally write over your original mp3. Give the file a descriptive name and save it to a loops folder which you also need to create.


4. Press the obvious play button to listen to the track and find the part you want to loop. In fact, take a moment to orient yourself to the various playback control buttons, and moving around within the track by clicking wherever you like within the timeline. You can highlight sections of music by clicking and dragging within the timeline. You can use Ctrl-1 and Ctrl-3 to zoom your view of the file in and out. The part we're going to loop is near the beginning of the song, so let's zoom in there a bit: 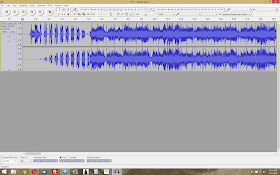 5. Trim the loop to size. Say we've decided the part we want to loop is right about here, in the highlighted-in-gray area: 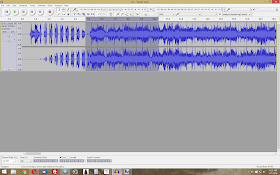 We need to trim away everything before and after that section, and then trim it some more to get a clean loop. On the timeline, point and click to someplace close to, and before, the beginning of the part you want to loop— do you see where the pointer is around the 5" mark? 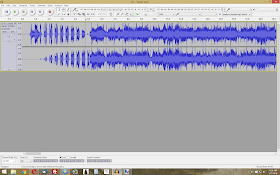 Delete all the audio up to that point by hitting shift-home (or shift-J), then delete (or Ctrl-X). Hitting shift-home highlights/selects the area between the cursor location back to the beginning of the track, and delete deletes it. 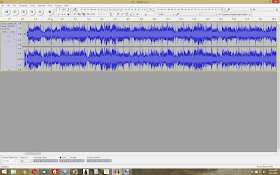 Now click somewhere around the end of the section you want to loop— close to it, but definitely after it, hey? Then hit shift-end (or shift-K). This highlights the track from your selection point to the end of the track. Do that, then hit delete: 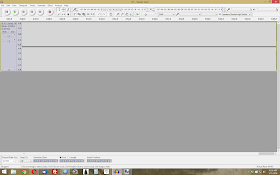 Omigod. What happened? What's going on? Now you see this. Don't freak out and trash your office. Just hit the home (or J) button to move the cursor to the beginning of the track: 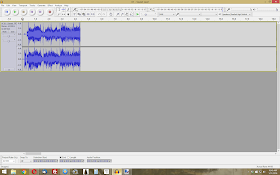 You have now isolated the approximate section you want looped. Since we left some extra space at the beginning and end, let's trim that stuff away. Zoom in by clicking Ctrl-1 a few times. FYI: Ctrl-3 zooms out, Ctrl-2 restores your original view.

You'll now see the beginning of the remaining track, close up: 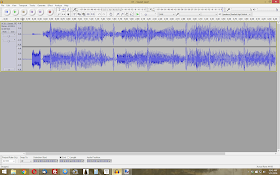 If you listen to the audio, you'll hear and see that that first big spike in the waveform at 0.50" is where you want the loop to begin. Place the cursor before that as close as you can get it. Sometimes the waveform will be a little fuzzy, so when in doubt, trim less— leave a little too much. Then hit Ctrl-home, and then delete. 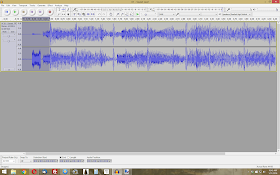 Now let's trim the end. We want to find the downbeat after the end of our desired loop, and put the cursor right before it. Then hit Ctrl-end, and then delete. Again, it's better to leave a little too much. 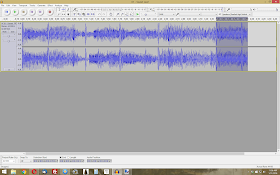 Now we have a first rough version of the actual loop. To listen to the loop played continuously, hit shift-play— the shift button on your keyboard plus the green play button in the Audacity window, selected with your mouse: 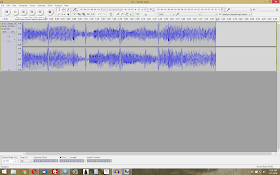 You should be able to hear right away if the loop is too short or too long— it will sound like it's rushing or dragging getting back to the beginning. If it feels like it's rushing, you're going to have to go back and trim the beginning and/or end again. Hit Ctrl-Z a few times to undo your last edits, and redo the trims, leaving a little more space on both ends. If it sounds pretty good, listen closely while tapping a steady rhythm on your desk, leg, whatever. Keep it clean. If you can feel yourself correcting your tempo as you listen, you'll need to trim it down some more. Zoom in and do a few micro-trims at the beginning and/or end until it loops smoothly. Remember, any time it's rushing it means you've trimmed too much, and you'll need to Ctrl-Z to restore it a couple of steps back so you can try again.

If you're having a difficult time with it, don't rule out that the recording is not in time with itself— the band may have rushed or dragged in one spot, or their execution may have been sloppy, which will make it difficult to practice along with. In that case you'll have to try another spot in the song from which to make the loop, if there is one.


7. Make the track. Now that you've massaged the thing into shape, let's make it into a usable-length track. Technically, you could just load the short sample onto your mp3 player, and set it to repeat, and play along with that. I think it's a better idea to repeat it in Audacity, so you have a track 3-5 minutes long, with many repetitions of the loop on it.

To do that, just hit Ctrl-A, to select the entire track; then hit Ctrl-C to copy it; then hit end to move the cursor to the end of the track; then hit Ctrl-V to paste a copy of the loop to the end of the track. Ctrl A>Ctrl-C>end>Ctrl-V. Do that as many times as you need to to make the track as long as you want it. If the loop is only a few seconds long, you probably want to paste it in a few times, then Ctrl-A>Ctrl-C again so you're pasting a longer chunk of audio.


8. Export the track. Finally, we need to export an audio file for your actual practicing— probably you want an mp3. Under the File menu hit Export Audio, and it should be self-explanatory from there if you've ever used a computer before. Save as type .mp3 with a quality of at least 128kbps— you can adjust the quality under options. Once you've exported the file, and you're closing the program, Audacity will ask you if you want to save the file— the Audacity work file— I don't bother, unless I haven't finished the loop.


9. Enjoy your loop. Load it onto your mp3 player, whatever that may be, set it to loop (or not), put on your headphones and rock out. That's it!
Todd Bishop at 10:26 PM
Share