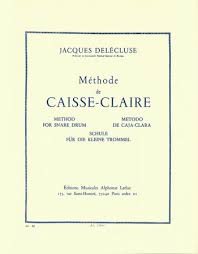 The French percussionist Jacques Delécluse has passed away. I frankly didn't know he was alive; we worked out of his book Méthode de Caisse-Claire in college, and those French-published books present themselves with such authority it makes you think they must've been written by contemporaries of Rodin, Debussy— 19th century types. Certainly that's by design. I think the book was actually less than 20 years old.

Méthode was our companion to Tony Cirone's Portraits In Rhythm, and Delecluse's place in percussion literature in France rather parallels Cirone's, in the US:

When Jacques started to write his etudes in 1964, there was almost nothing in the repertoire for snare drum in France: no methods, no books, no etudes, no solo pieces. Percussionists had to study from orchestral excerpts, military drum books, and a couple of low-level standard pieces. Delécluse did not merely revolutionize the pedagogical writing for percussion, he invented it! From nothing, he built a real school for percussion and created a pedagogical repertoire for snare drum, xylophone, timpani, and vibraphone. There is a good reason that most of these books are still in use today all around the world.


Jacques Delécluse brought a new dimension to percussion playing: to consider dynamics, accents, phrases, and musical expression. In short, he makes us think about “how to make music with a drum.” This idea took root more than 40 years ago and is still applicable today. Jacques truly created a “school of percussion” and has deeply influenced generations of percussion players and teachers not only in France, but all over the world.