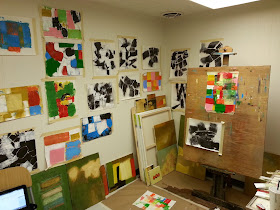 It looks like we'll be seeing a small shift in emphasis, here, as I've set up a studio, and am painting again after about a ten year hiatus— plus another few years when I was doing more with photography than painting. It happens that my sister, who is an interior designer, sold a couple of my better pictures remaining in inventory, and that has focused my mind on the facts that a) oh yeah, I can make money selling paintings, and b) I'm running out of stuff she can sell— I'd better do some new work.

Money and dwindling stock may seem like crass reasons to make art— it should be something you are driven to do!— which I am. I never stopped doing visual creative work. But at a certain point in your life you become a sort-of finished artist, and it doesn't really matter what the medium is. I can put my focus where it makes sense from a business perspective without really sacrificing my personal expression. In the context of my career, I can do that.

It helps that painting was never going to be about technical chops for me— I was going to do in a self-taught way, like a rock musician. Once they know their basic thing, those guys can sit around in St. Tropez, not doing or writing anything for a few years, and then go into the studio, and, hammering it out for a lot of months, produce some creditable work. Right now I'm relearning the medium by doing some sketches in acrylic on paper. Acrylic is a versatile medium-heavy bodied paint, like oil paint, but it's water soluble. It dries more quickly and is easier to work with. After a day or two of fighting with my old habits, with disappointing results, I realized my old improvisational style isn't working that well. I would make a lot of marks I shouldn't have. Instead I need to step back, look, figure out the next thing that's going to make the picture better, and then try to get some clean paint onto the paper. 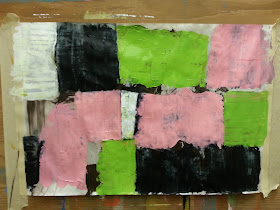 What I have going for me now is that I'm not as broke as I was when I was younger, and am not as miserly with paint as I used to be. And I have 15 more years experience in using my eyes looking at and designing photographs. A lot of bullshit concerns of my 20s have fallen away. 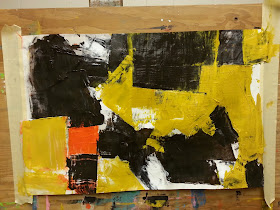 One thing that has really changed is the ease of photographing the work with a camera phone. The instant feedback is really helpful. Looking at your pictures on a screen gives a false impression of them, but it also gives you some distance, and ties the pictures together. It helps you see the picture the way it's going to look packaged, and in context. The last time I was seriously working, I didn't own a digital camera— cheap ones were horrible— and getting your work photographed meant paying somebody $500 to shoot some slides. It was kind of like playing music without ever recording. 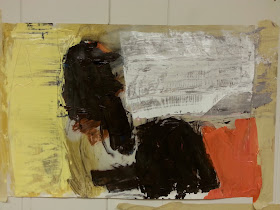 Once you actually get into the studio and begin painting, it's remarkable how difficult it is to stop. It can take an hour to actually get out of the studio after you decide to be done for the day— it's really hard to stop looking.
Todd Bishop at 11:50 AM
Share