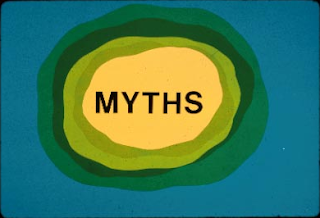 A decent piece from the Modern Drummer site— 12 Drumming Myths Debunked. Here are the entries that interest me, with my comments on them:

2. Mistakes are always bad.
Honor thy mistakes with repetition—I think the legendary Brian Eno said that. If it’s the right mistake, and you react quickly enough to it and then either repeat it artfully or create some cool variation of it, you could end up being called a drumming genius.

Plus, if you obsess over playing everything just right, you’ll likely have trouble relaxing enough to groove well. And you’ll have trouble opening yourself up to the unknown, which is something great artists continuously strive for.

So you blew that fill—what are they gonna do, arrest you? Lighten up and have some fun.


As I always tell my students, mistakes are real music trying to happen. They're things you know how to play, but that you haven't accepted you know how to play yet. Obviously, there are mistakes and there are mistakes; you don't want to drop beats or rush terribly. But things that you didn't mean to play, but are basically in time with a good sound, are not mistakes. It's an especially valuable philosophy in the practice room: playing out of books, mistakes are actually natural variations on the written thing. When they happen, recognize what you did “wrong”, and learn to play that on purpose, as well as the “correct” pattern you were trying to learn. Learning the written idea, plus all of the things you did leading up to learning it, it becomes living vocabulary; a little related body of stuff to play, instead of just the one written-out book-thing.

3. More resonance is always good.
About fifteen, twenty years ago, the drum industry fell all over itself trying to create mechanisms that allow toms to resonate as freely as possible. The trend continues today, with some manufacturers shackling their otherwise gorgeous kits with hideous-looking suspension mounts in response to this “need.”

It seems to me that a blind ambition toward more resonance represents a case of art following technology, rather than the other way around. Yes, a less choked drum can often mean a better-sounding drum, and the resultant longer sustain of a note can be a desired effect. The opposites are obviously sometimes true as well, given the existence of things like Moongel and electronic gates.

While it’s cool that mechanical “improvements” like suspension mounts give us more options, be careful to separate the marketing from the motivation. In this day and age of overly programmed music, it’s always wise to question the importance of any piece of technology, no matter how seemingly benign.


Mind you, Bonham's drums and Blakey's drums were basically unmuffled on those recordings. The author seems to mainly be taking issue with mounting systems. Personally, I don't think RIMS-type mounts vs. standard mounts is the big issue— it's more about unmuffled, single ply heads vs. dampened heads. There is a time and place for each; for many years I had all my drums, bass drum included, wide open in all situations. As it turns out, there are times you want to use some muffling: when playing on the softer end of the spectrum, or with incompetent soundmen, or in the recording studio, based on consulting with your engineer.

Several more after the break:

4. Bigger drums are louder.
Though larger drums move more air, smaller drums have higher pitches, which can cut through the music more easily. If you want a subsonic boom so bad that you’re willing to schlep a 26″ bass drum around, all the power to you. Just know that you’re not necessarily going to rock the house that much more with it.


For most practical purposes, I disagree here. You may hit diminishing returns selecting an extremely large bass drum over a normally large one, but generally, a 22 or 24" drum is going to make more sound than an 18 or 20". And larger drums ask to be played louder, because they require more force to get the same timbre as smaller drums. Get out a 10" drum and a 16" drum, give them the same low, funky, tuning, and compare. Playing softly, you will get a better sound out of very small drums than very large ones.

In general, just be aware that smaller drums may have greater effective volume, to an extent, and that it's not just a simple equation of bigger drums = louder.

5. A stiff feel is a bad thing.
If the music calls for it, a “vertical” feel might be the most appropriate thing. Some new wave and electronic music, for instance, would sound silly with slinky grooves. Creating intentionally mechanical beats to highlight certain lyrical content can be the perfect choice. Beware of people who always slag songs or bands for sounding too stiff. If the drummer is furthering the artistic cause—whether or not it’s your taste—give him or her the benefit of the doubt.


Being musical musicians, we try to play with shape and nuance, but that's not always most effective in the context of a pop arrangement. Often what sounds best in pop, rock, and funk drumming is to just state your notes accurately and evenly, so everyone can hear them— which can mean that you're doing them at kind of a uniform volume, with what could be described as a mechanical feel. Normally you might call that solid rather than stiff— stiff pretty much suggests playing inappropriately that way for the context— a bad thing. Bad stiffness can also be suggested by generic, uninspired drumming— a solution to that is to play and listen to more good music, especially music outside of the above genres.

6. Brushes, dowels, and the like will allow you to play more quietly.
Not always. What these alternative strikers do do well is offer different impact sounds, giving you another way to differentiate song A from song B. But if you’re just trying to play the same music at a quieter volume, you’re better off learning to play with more control, perhaps with thinner sticks.


I'll switch sticks when I need a lot of volume, but generally the only reason I switch implements is for sound or tone quality. As I've stated elsewhere, you want to be able to play as quietly with sticks as you can with brushes.

10. If it feels good to you, it’s right for the song.
Every musician has certain grooves and tempos that feel best to play. But don’t assume that the particular song you’re playing works best at your favorite tempo or groove. Sometimes to make a song happen, you have to play a part that initially feels awkward. The proof is in the pudding. Listen back to a recording before you make a final judgment. And listen respectfully to the opinions of your bandmates. Not all singers are morons.


This was a hard one for me to learn. I would try to be an artiste in all situations, believing that playing what I heard and felt would lead to the best music, and would justify having me on the date. Not that I wasn't playing appropriately for the music and setting, but I was always trying to give a spontaneous, live, “real” performance. Sometimes that works, but often you need to actually plan your part a little bit, and just execute it— and have have faith that the people asking you to play a certain thing have a good reason for it, even if it makes no sense to you.

12. You should work toward being proficient at as many different styles as possible.
Maybe, maybe not. If everyone did it, then we’d likely have fewer players with truly unique styles. Would Elvin Jones have been “better” if he mastered garage rock, electro-pop, and Elton John ballads? Maybe. Maybe not.

Yes, learning new drum styles allows you to play in more situations, and we can never have enough tools in our belt. But not every drummer is cut out to play different styles convincingly, or even absorb them effectively, no matter how much they practice. Some musicians are destined to cut their own path, and they shouldn’t be shackled by the “wisdom” of academia when their time could be better spent following their own muse.
Would the world necessarily be blessed with more great, original music if every musician tried to be a jack-of-all-trades? (Remember the other half of that saying: “master of none.”) If you’re into exploring different styles, by all means do it. But if working out of method books or listening to samba is just not your thing, maybe you should focus on finding your musical voice, developing it, and playing with people who “get” you. History might just remember you more fondly.

Just remember, if you’re avoiding certain types of rhythms out of laziness or closed-mindedness, you’re the only one losing out. The point is, take the time to discover who you want to be as a musician, and follow the path that gets you there, regardless of how well traveled—or un-traveled—it is.


I disagree here, on a number of points:


So, yeah, big disagreement here at the end— this is just excuse-making. Nobody gets off that easy.
Todd Bishop at 10:12 AM
Share