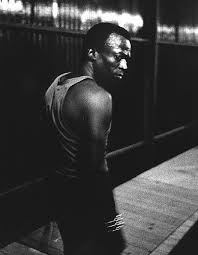 This is from an interview by Jake Feinberg in Tucson, who you should be following— he's interviewed a lot of great people:

“I've been a sideman in a lot of different bands. The only time I ever took instructions was when I was a studio shark in London. The producer of the record would come in and say, 'I want this kind of sound; I want an edgier sound; I want this, I want that.' They've given instructions right, left, and center.

The only instructions Miles Davis ever gave me were, 'play it like you don't know how to play the guitar.' It's not something you can logically understand. To me Miles was a very advanced human being—a Zen Master. I'm standing with this piece of music, and he totally threw me out of my normal state of mind. I had no idea what I was doing when I was playing after that request. And yet Miles loved it. That was the 'In A Silent Way' recording. I can tell you that I had no idea what I was doing until I heard the playback.

Which is the way you should be when you play music. You cannot be in an ordinary state of mind.
You have to be kind of inspired. You have to have some kind of joy—some kind of exultation. You need basically what's inside everybody, but in music we have to be able to bring it out.

I remember we were in the middle of a session and he wasn't happy. He stops the band and walks over to Jack DeJohnette. He said, 'Jack: ba........Ba.......boom.....Ba....Ba...ok?' Now what do you make of that? Jack says, 'ok Miles,' and his playing changed dramatically from that point. He just cut right loose; he freed right up. That's the genius of Miles. Never ever would he speak about reading or guiding—you had to watch him, and see what he was doing, and how he was doing it. It's as important to know what you don't want as it is what you do. I learned just being with him as a sideman.

My first gig with Miles was a lesson of humility in my life. We finished the first set and I thought he played like a god. We're sitting in the locker room, and he comes over to me and says, 'aw John, I didn't play shit.' He's apologizing to me, and I'm just the young guy who joined the band. I'm this young white guy from Europe. I thought he played like a god. He came over to me, and he didn't need to say that to me. That's how sincere he was. That's how dedicated he was. He knew I loved him. I admired him back 12 years prior to meeting him. He could feel that, and in a way he wanted to live up to my expectations of him. He was brutally critical of himself. He was critical of everybody but he was critical most of all of himself. That's the beautiful thing, and that's what made him great. He was not just a great musician—he was a great artist. New conceptions, directions, and forms—I got lucky. I got to play with one of the great masters of that era. Just being there and hanging out with him, I was picking up all the time: how to do it—how to see things. When you see things through his eyes, you see things differently. When you hear things through his ears, you hear things differently.”